Wine, Please: a tour of Walla Walla Food and Wine

Mill Creek was a rush of water through the middle of town – an upwelling of recent snowmelt and rain that careened westward toward the valley and gorge beyond. It sounded of the impending new season and warmth, but even now the first tint of spring was still tempered by cool nights and frost lingering close by at the foothills of the Blue Mountains, the remaining skiffs of snow not much higher above the valley floor. We had come, the four of us, from over those mountains, seeking a brief respite from winter and a university term just completed, but mostly for a bottle or two of good wine. Walla Walla was a place we had visited independently, but it had been many months since the small town at the edge of Eastern Washington had drawn us back. The celebratory weekend was thus centered on that search for good wine, good food and a moment of escape, and we were eager to let the currents of those few days guide us.

After settling in at our Airbnb rental near Pioneer Park, pleased to share a complimentary bottle of local wine, we made our way to Whitehouse-Crawford, a restaurant housed in the brickwork of an 1880 lumber planing wood mill, and after being seated, were eager to order a first round of drinks – of which I highly recommend the Smoke and Mirrors – and the famous fried namesake Walla Walla onion appetizer. The following dinner service was impeccable, with synchronous serving for the four of us, a shared plate of pork steam buns followed by entrées of karaage fried chicken with ponzu sauce and slaw, Rava Dosa with various chutneys, locally sourced Painted Hills tenderloin with an airy and buttery piping of mashed potatoes, and a tortellini en brodo served in a clear ginger-carrot broth. The tables around us were full on a Friday night, and the lively banter and cheer was punctuated by the obvious pauses of approval at each newly served meal, all as tempting as our own. Collectively sated, we shared a sampling of desserts and a last round of drinks before making our way back into the heart of town and returning to our rental, the sound of the distant creek again filling the quiet evening air draped over the town.

Walking into Bacon & Eggs the next morning it was hard not to notice the library of hot sauces in the threshold between the two central seating areas, shelves with offerings from the classic Tapatío to a house made tomato-based sauce to Surrender the Booty Ghost Pepper sauce, and as we sat down to fresh brewed coffee I made my way over to peruse and select a few options. The restaurant was bustling and loud on a Saturday morning, but service was quick and equally attentive and soon we were enjoying Migas and hashbrowns, and for the other three, Benedicts served two ways – with smoked salmon lox and the classic ham alongside coffee and breakfast cocktails. With prismatic light spangling out over the tiled floor and our plates, we ate quickly, being daring and then cautious with hot sauce and letting egg yolk swirl with crisp potatoes as day broke over the historic downtown.

After walking across the street to visit a few shops we made the requisite stop at Colville Street Patisserie for lattes and each a croissant, cannelé, palmier or macaron – or larger combinations of two or three. Driving west out of town for our day of wine tastings. Located in Lowden, WA in a historic schoolhouse, our first stop at L’Ecole Nº 41 was already busy just past midday, and we were strategic in finding space at the bar to be introduced to our first tasting. Walking around the school we sampled a variety of whites and reds, and after a few breadsticks and a lesson of vineyard cartography of the Walla Walla Valley we left with a selection of bottles, a clean citrusy and vibrant Chenin-Blanc at the top of my To-Enjoy-Later list. Angling back southeast toward Walla Walla we left the main arterial highway in favor of side country roads, and between swales and valleys where lesser creeks still cut into their banks with muddy runoff

We arrived at Saviah Cellars, a modest winery set amidst fields of dormant vines and rural pastureland just beyond the fence line and neighboring trifecta of wineries. Entering past a room of exposed barrels and a live-edge walnut table we opted for a second tasting, savoring each pour, with their bottle of fruit-forward, jammy Estate Jack a favorite as it was a recognizable blend that our rental host had gifted the night before. 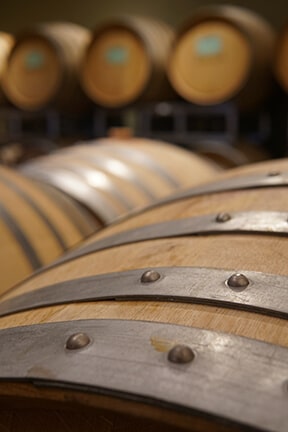 From Saviah we ventured a few miles and a few hundred yards over the border into Oregon to Castillo de Feliciana where a now gauzy afternoon light gave reason to sit outside the villa exterior where we sampled a selection of charcuterie and cheeses alongside our final pours of the day. As our two golden retrievers dashed across the lawn and between the hedges that bordered the winery, we all put in bottle orders for our favorites – mine the crisp Albariño and the subtly smoky reserve Tempranillo – and stepped around the gathering of fellow guests at tables both in and out of estate to survey the patchwork of hills and farm that ran east toward the mountains.

Crossing back into Washington, as we followed the curvature of the road alongside rushing water and the timid new buds of stone fruit and muddy hoof prints of mule deer drawn across the asphalt, it was warming to see the townscape of Walla Walla emerge over the hills as light played through a rent in the cloud cover. The 1928 Marcus Whitman tower and beyond where the crest of buildings along Main Street like the 1917 Liberty Theater and the corniced 1882 Barrett Building, were all tinted amber by the late dusk, and while we were tempted by the offering of additional wine tastings and music in town and another sit-down meal, we opted to order takeout pies at Sweet Basil Pizzeria and to return to the rental for slices and a few pints to temper the wine and tempo of the day.

We had planned the trip weeks before to dismantle ourselves from a wintertime chronology of routine, and as we sat there, divvying out hot slices and cold cans of lager, listening to a dog bark in the distant, the idle of a truck across the driveway, and the rush of air off the Blue Mountains as it sunk down to follow the contours of the winding creek, we told stories of the day that transformed into newfound memories and promises to return.

James Stolen is a writer, teacher, photographer and outdoor enthusiast living in Eastern Oregon. When he is not in the classroom he is often travelling the American West, cooking with friends, exploring new cities and finding new wild places to explore. You can follow him on Instagram at @thestolenword.

A Day in Downtown Vancouver, Washington