Hugging the shores of Liberty Bay, Poulsbo’s downtown corridor is adorned with gingerbread house facades and Scandinavian-themed murals. Much like Leavenworth, its more famous cousin, Poulsbo is a European-styled village designed for tourists. Kitsch and quality collide in Poulsbo. The locals lean into their Scandinavian heritage, so there’s no shortage of t-shirts with pithy puns and Viking merch. There’s also an attentiveness to quality that has attracted new and long-standing restaurants, shops, and galleries. It’s incredibly walkable, with the main commercial hub stretching over a few small but lively blocks. 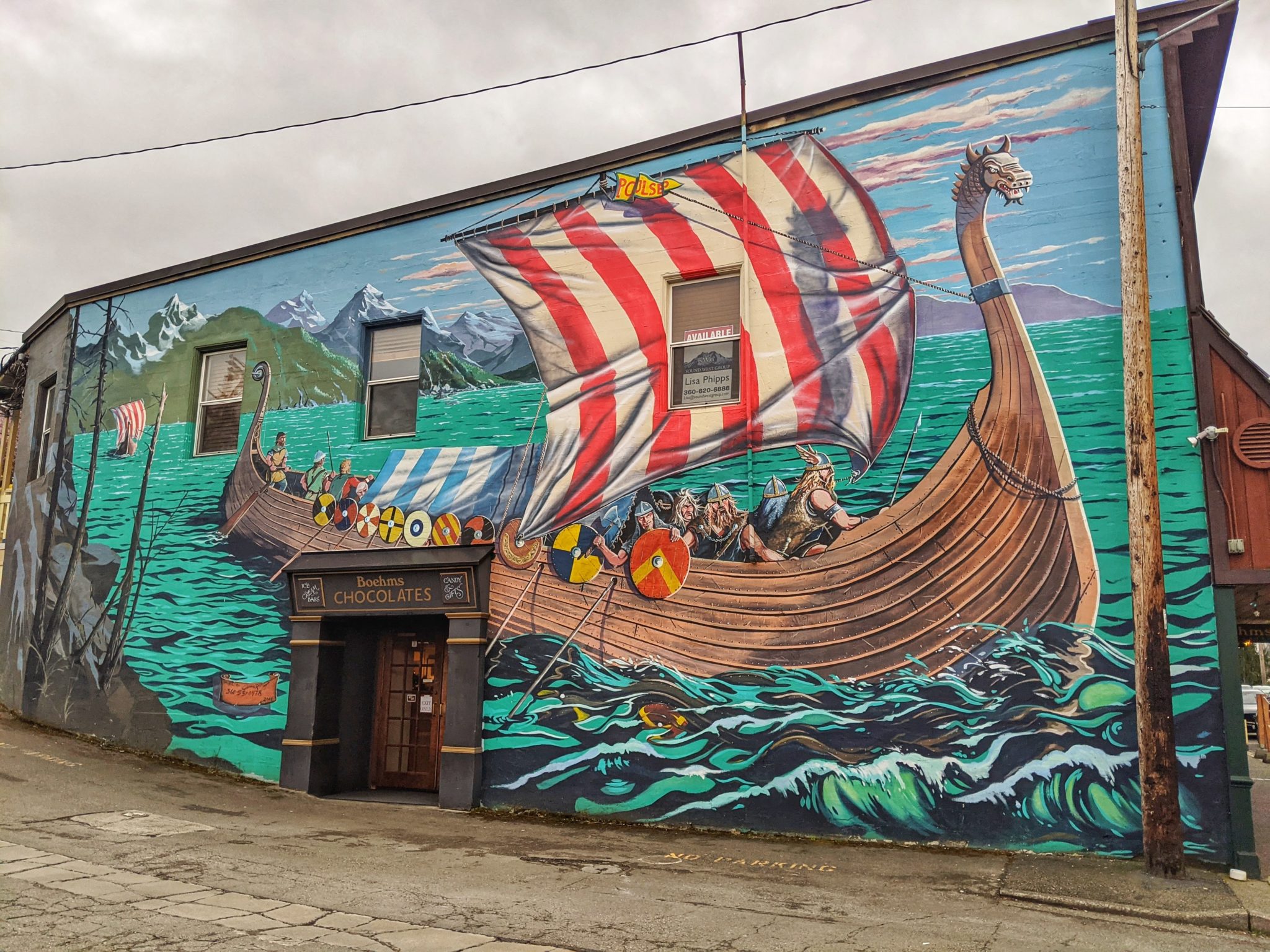 The Suquamish Tribe has called this area home for thousands of years. It wasn’t until the late 1800s that the town as we know it was founded by Norwegian immigrants. Bearing a striking resemblance to the motherland and rife with resources, Scandinavian settlers came to Poulsbo in droves seeking opportunity. At one point, the town was so heavily populated with immigrants that Norwegian was the primary local language.

The village was named for an early settler’s hometown in Norway called “Paulsbo.” The villagers petitioned to build a post office and in the process, the U.S. government accidentally subbed the “a” for an “o” on the paperwork. The new spelling stuck, creating yet another confusing and oft-mispronounced place name in Washington state.

Today, it’s a twee little spot that’s brimming with amenities and a calendar that’s stacked with events. Below are my favorite spots to eat, imbibe, explore, and shop around Poulsbo.

Poulsbohemian offers one of the best cafe views in the state. Perched uphill from the main drag, Poulsbohemian overlooks the whole of Liberty Bay. Grab a window-side seat and watch statuesque herons on the shore and the steady movement of boats gliding in and out of slips. 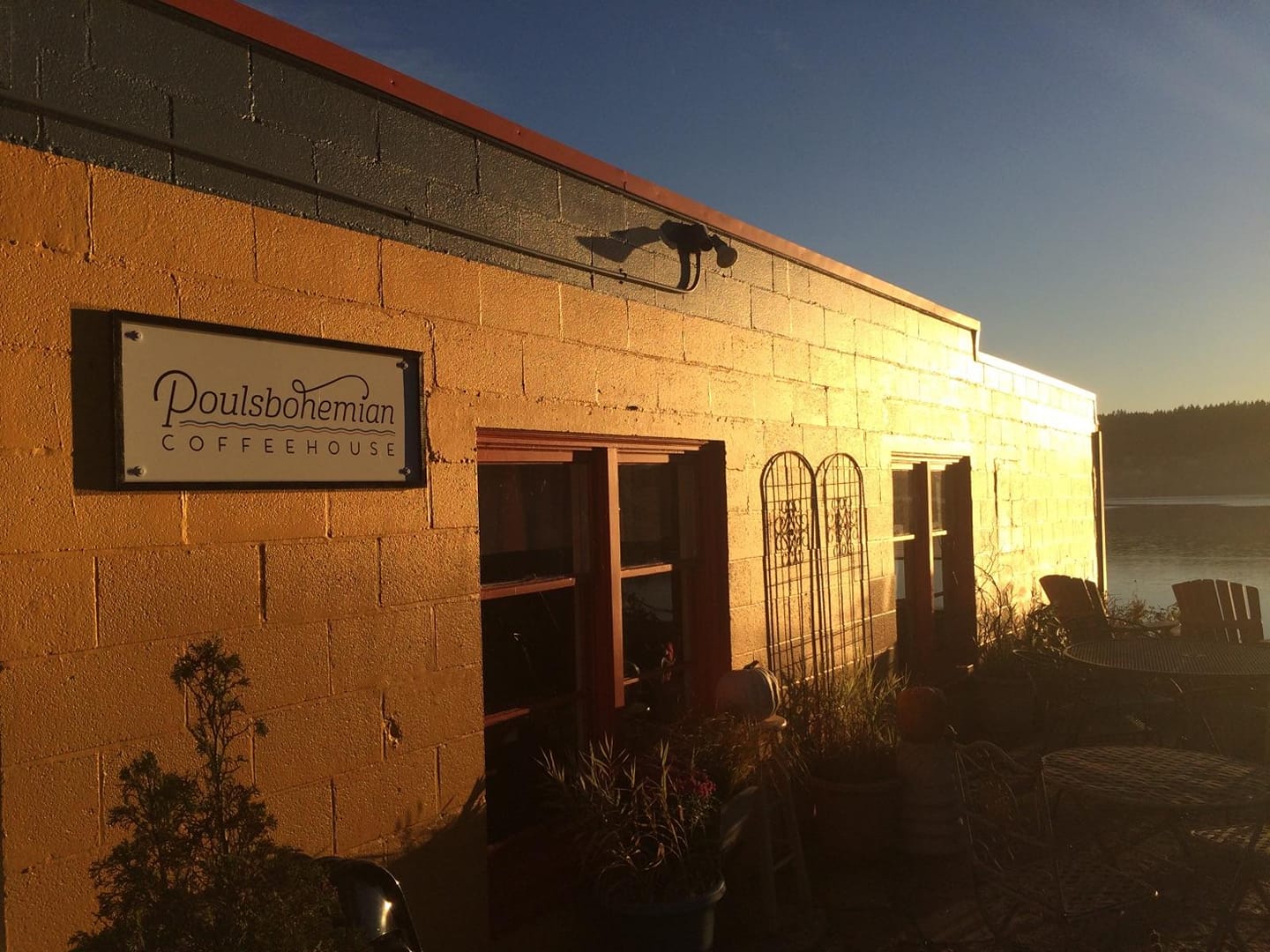 This indy bookstore greets you with bright colors, two resident corgis, and familial vibes. It’s an especially kid-friendly space, which is unsurprising when you learn that the owner is a children’s book author. The shop plays host to book clubs, author talks, and themed gatherings. Follow their Instagram page to learn about upcoming events. 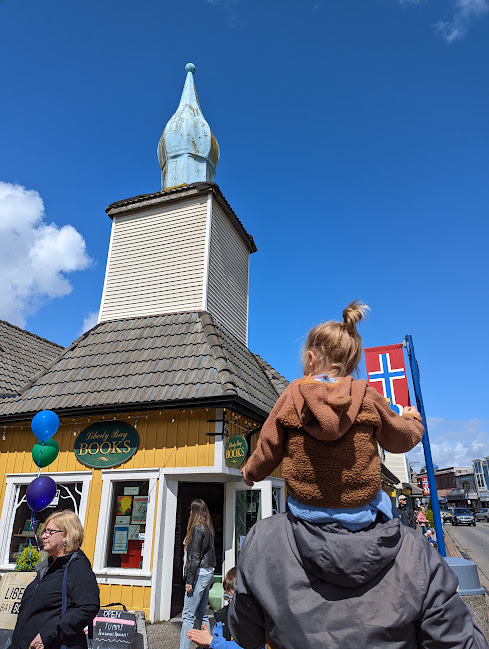 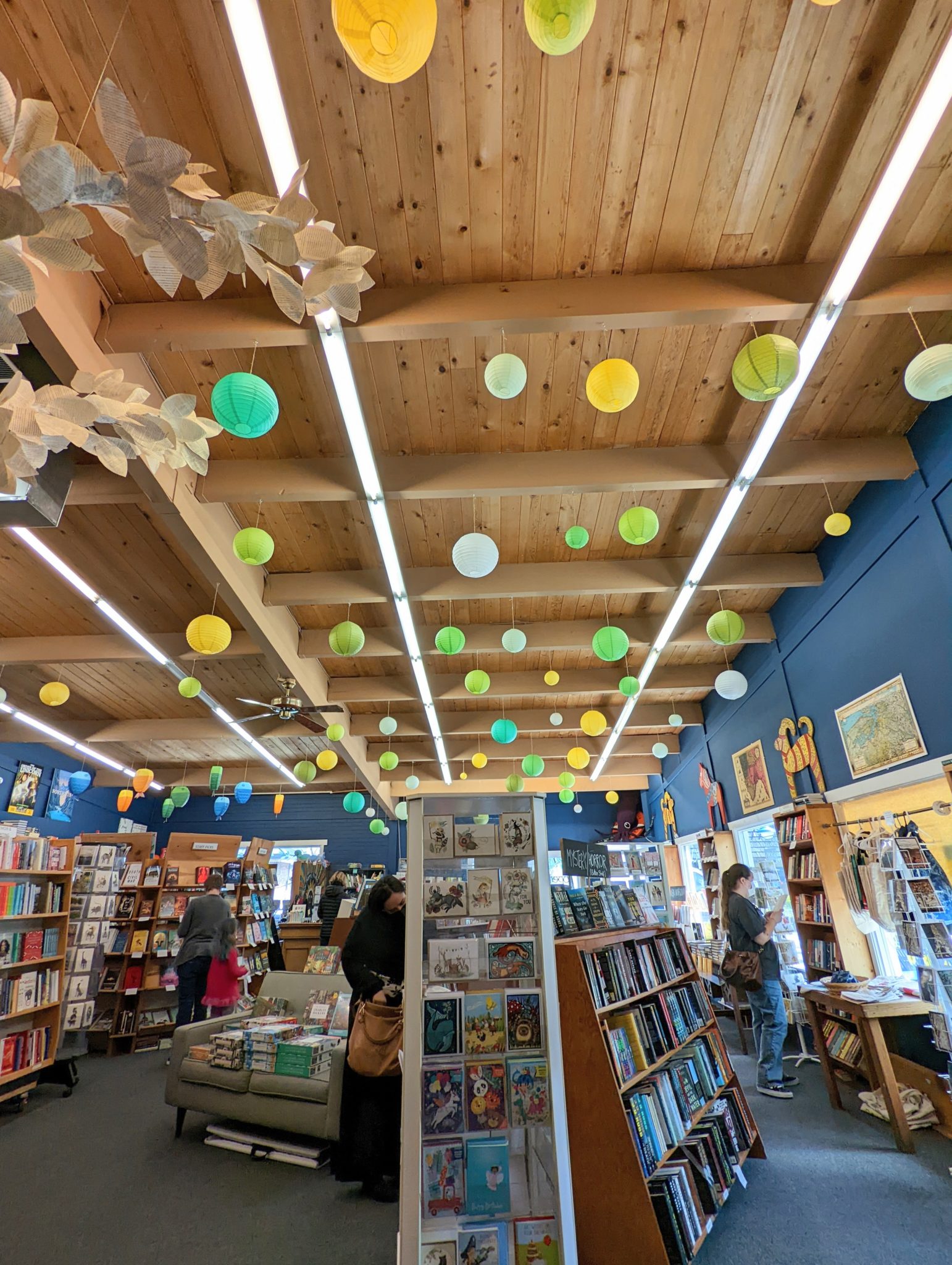 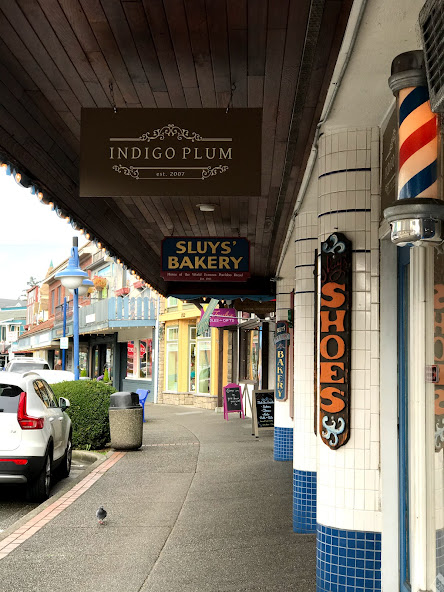 Swedish for “girl,” Flicka (fleek-a) is a spot to find timeless wardrobe staples. As you might expect from a waterside town in the PNW, Flicka has practical and stylish clothing, like lace-up Ilse Jacobsen rain boots and sweaters that can withstand a bracing wind. You get what you pay for at Flicka; expect higher prices, but go home with something that will last.

Scandinavian goods are known for their quality, so there’s a lot to love about Nordiska. You can shop for yourself, your baby niece, and your best friend all in one curated space. Nordiska is also one of the few places around Puget Sound where you can purchase Dala horses, the small wooden figurines that have become the de facto folk art symbol of Sweden.

In the very center of downtown Poulsbo, Tizley’s is a second floor bar and restaurant serving European comfort foods in an intimate dining space. Their hearty offerings include wienerschnitzel, shepherd’s pie, goulash, and Swedish meatballs. My favorite menu item is Kase Spatzle - a German version of mac and cheese with a shocking amount of Beecher’s cheese sauce and caramelized onions. This dish might send you to an early grave, and to that I say: Worth it. 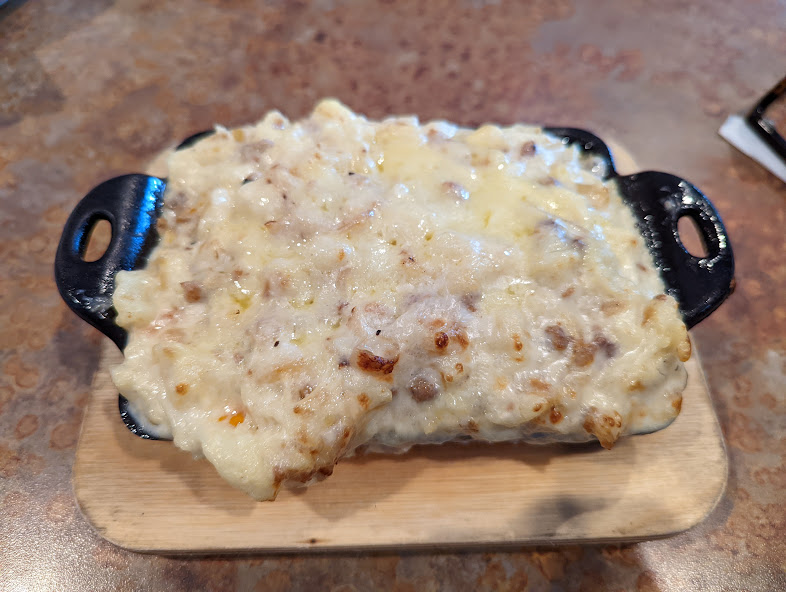 It wouldn’t be Poulsbo without Sluys. Though ownership has changed hands over the years, this location has been a bakery since the early 20th century and has been operated by the Sluys family for over 50 years. Their claim to fame is a proprietary recipe for “Poulsbo bread,” made from wheat, barley, beans, lentils, and millet. For sweet tooths, there are dozens of delicious options, including traditional Swedish baked goods.

The newly remodeled SEA Discovery Center has touch tanks, rotating exhibitions, and an impressive collection of marine life. While the museum is geared toward kids, it’s an enjoyable experience for all ages. Highlights include the spectral Moon Jellyfish and a lookdown tank where you can experience a close up view of the biodiversity on the seafloor. 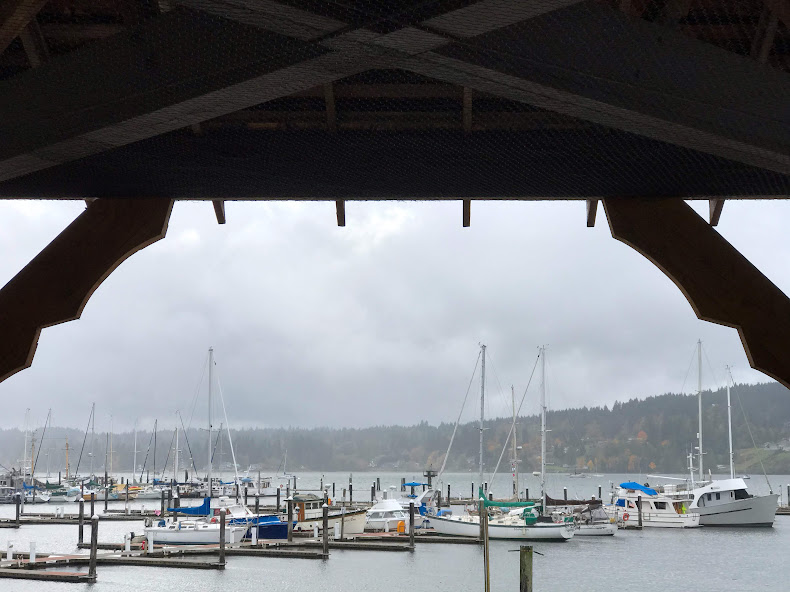 Whether it’s somber and gray or a gloriously sunny day, the views from the park are always tranquil. With a large gazebo and plenty of places to sit, the park plays host to many of Poulsbo’s events. Enjoy your Sluys pastry with a side of people watching on one of their Viking-themed benches.

Know before you go:

-You’ll find ample parking between the water and Front Street. Poulsbo is best seen on foot, so take advantage of their free parking lot and enjoy the stroll.

-Poulsbo is less than 15 minutes away from Bainbridge Island.

-Event and festival weekends are not to be missed!  Try to time your visit to experience Yule Fest, Chief Seattle Days, or the iconic Viking Festival in May. Check out the town’s tourism website for information. 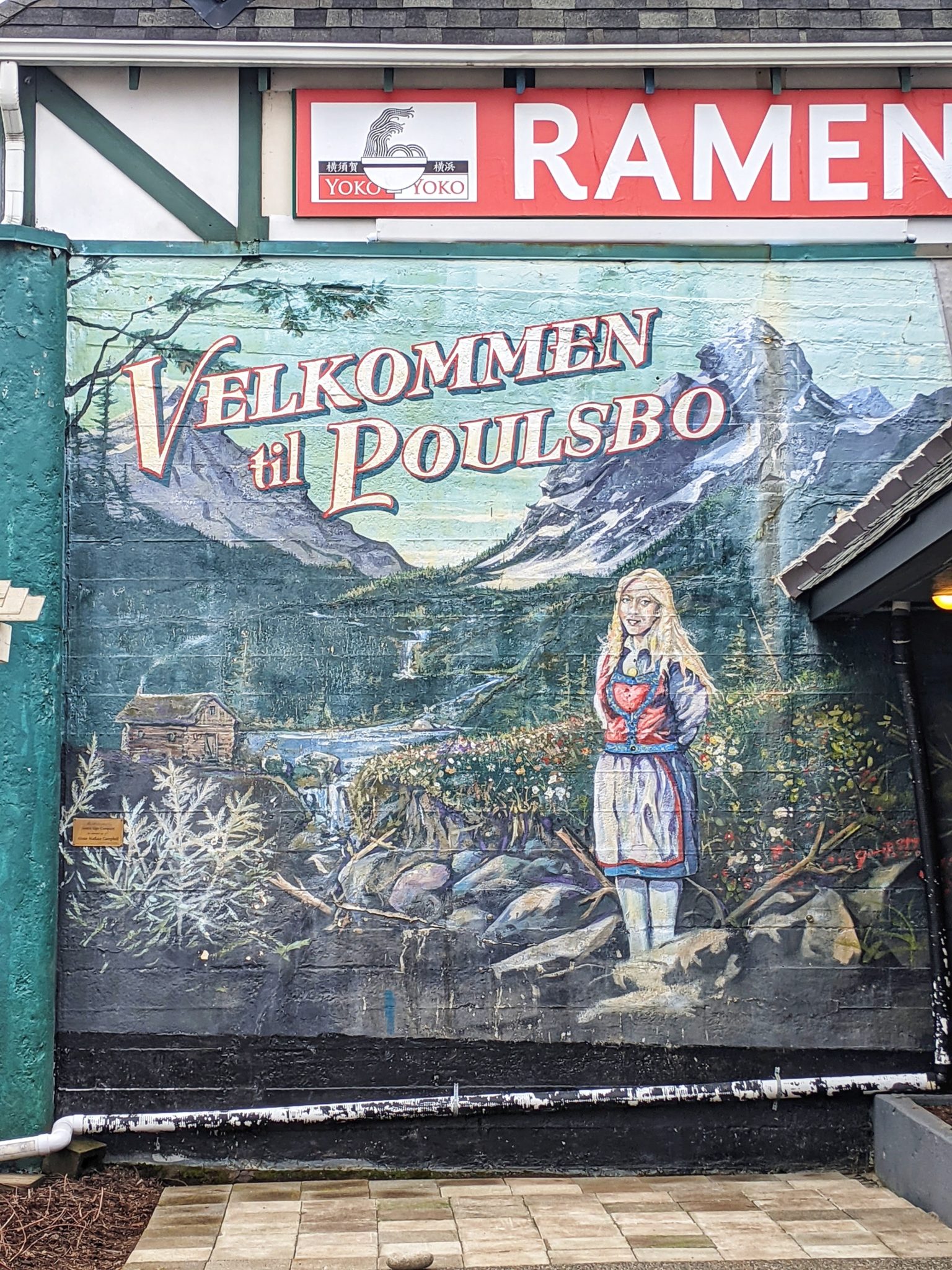 Britt Board (she/her) is a compulsive explorer based out of Tacoma, WA. She enjoys weird roadside attractions, family-friendly adventures, historical spots, and nature. When she’s not traveling, she’s planning future travels and hanging out at home with her husband, precocious toddler, and unemployed pug.