Where to Go Mushroom Hunting Near Me? A Beginner’s Guide to Hunting Mushrooms in Washington State

Home » Where to Go Mushroom Hunting Near Me? A Beginner’s Guide to Hunting Mushrooms in Washington State

So You Think You Can Forage? Thinking about “where to go mushroom hunting near me?”

As a novice mushroom enthusiast, I’ve just begun to scratch the surface of the seemingly endless possibilities when foraging fungi in the Pacific Northwest. From culinary delights to medicinal powerhouses, mushrooms have been revered, harvested, cultivated, and consumed since the beginning of human history.

It’s been incredibly fun for me to dive into this uniquely dual-natured world of tradition and science, and fortunately for me, I’m located in one of the prime epicenters for foraging: Washington State.

If you’re a beginner interested in taking a hike in the woods and emerging with some treasures, there are a few things you must keep in mind! The basic tips I’ve listed below will provide you with an excellent starting point from which to learn and grow.

Although many species of mushrooms are available all year round, fall and spring are generally the best seasons to forage. There are particular species that emerge at very specific times, often related to temperature ranges and precipitation.

If you’re interested in collecting a specific type of mushroom, I’d encourage you to research when it typically emerges so you increase your chances of finding it.

From what I’ve observed, it seems that in most cases, the amount of mushroom activity is directly related to how moist the ground is. The wetter, the better!

The interesting thing about fungi is that they can be found almost anywhere. Parks, backyard lawns, gravel roads, road shoulders, pastures, river bottoms, and forest areas.

If you’re going on a walk in the woods with the purpose of hunting for mushrooms, the national and state parks of Washington State are a great place to start. Find a trail and take a hike! Just like anything else: location, location, location.

Mushroom species vary significantly by region, so learning about what types of mushrooms grow in a particular area will enable a better informed and more successful forage.

To help provide some direction if this is your first mushroom season, below are four areas across Washington State where you’ll likely find some edible mushrooms.

But for mushroom hunting, there are two areas that are of great importance: The Hoh Rainforest and Upper Dungeness Trail.

In both areas, I’ve personally walked and found an abundance of bolete mushrooms.

The term North Seattle refers loosely to the neighborhoods found north of the Ship Canal.

For mushroom hunting, there are two areas of great interest: Whidbey Island and Snohomish County. Both are known for sought-after edibles.

In the Mount St. Helens and Mount Rainier areas you can find chanterelles, shaggy mane and matsutakes.

Known for its modern amenities and breathtaking landscape, Eastern Washington is located east of the Cascade Range.

But if you’re foraging for mushrooms, specifically morel mushrooms, you must visit the Okanogan-Wenatchee National Forest.

If you come across any, you’ve hit the jackpot: these mushrooms sell for about $30 a pound!

As you head out for the trail, here are some suggestions for items you may want to consider bringing along.

Many people bring a basket or bag with them separate from their hiking bag specifically for the purpose of collecting mushrooms. This ensures they are kept separate from objects that may bruise or damage them.

You also might want to pack a cloth or some paper towels to go inside the bag or basket to help absorb any excess moisture and keep them from getting slimy.

It’s irrelevant as to whether cutting or pulling is better when harvesting mushrooms. There’s no significant difference in the impact of either method on the organism, so do whatever you like!

I personally prefer to use a knife when harvesting because it’s a bit easier to handle and seems to be a cleaner harvest with less damage to the mushroom.

Since we now live in the age of technology, there are so many useful resources available for those new to foraging. Two useful free phone apps are “Shroomify” and “Google Lens”. A useful paid app is “Picture Mushroom – Mushroom ID.”

Google Lens and Picture Mushroom allow you to take photographs of the mushrooms you’ve found and the app will assist with identification.

Shroomify is more of an electronic field guide and depends on your ability to describe attributes of the mushroom to assist with identification.

To conserve your phone battery and have a secondary method to corroborate your initial identification, it’s a smart idea to purchase a field guide.

“Mushrooms of the Pacific Northwest” by Steve Trudell and Joe Ammirati is a well-respected book for mushrooms specific to Washington State.

What to Look For

As you begin your trek, there are some terrain and environmental-related indicators that could help you in your hunt for mushrooms.

Many species can be found under certain types of trees, as they have a symbiotic relationship with that specific tree. For example, king bolete mushrooms are often found near fir and spruce trees.

Conversely, some fungi are saprotrophic, meaning they feed off of decaying organic matter and potentially act as a parasite to their host. As an example, oyster mushrooms are commonly found on or near dying or dead alder trees in Washington State.

Having an idea of what wild mushrooms you’d like to search for can be helpful because you can do some planning based on specific types of terrain and trees.

Be on the Lookout: Four Easily Identifiable Washington State Edibles!

Chicken-of-the-woods is an easy to spot, recognizable fungi that is often found in large clusters or “shelves” on living and dead trees. They are orange and yellow in color, and bright coloring indicates the fruiting body is ready for harvest, as it tends to become pale with age. What’s interesting about this fungi is that it actually tastes like chicken! Many have found they can use chicken-of-the woods in many recipes that call for chicken.

Also known as “lawyer’s wig” or “inky cap” mushrooms, these fungi are quite common and a desirable edible. Where I live, they make their appearance in late September to early October, with the first big rain. The stalks are smooth and the white caps burst from the ground with a cylindrical, torpedo-like shape. Eventually, the surface of the caps will become flakey, making the caps look “shaggy.” Harvest them quickly because if you let them develop for too long, the caps will flatten out, grow black and inky around the edges and eventually disintegrate.

Chanterelles can be found in shady areas under conifer trees, growing out of the soil. In Washington, they have a symbiotic relationship with Douglas fir, spruce, and hemlock. They have an orange coloring with ridges on the underside that are referred to as “false gills.” When cut open, the flesh inside of the stalk is solid, with white coloring.

Beware of the toxic look-alike, the jack-o-lantern mushroom (Omphalotus illudens, omphalotus olearius, omphalotus olivascens), which grows in clusters on wood. It won’t kill you, but it will cause some gastrointestinal distress. As long as you positively identify your mushrooms using reliable sources and confirm all of the characteristics, you’ll avoid imposters!

Lion’s Mane is a term often used colloquially to describe any variety of fungi within the hericium genus. More specifically, there are also coral/comb tooth and bear’s head tooth (H. coralloides and H. americanum, respectively) mushrooms. All three are white in color until they begin to age and will become a bit yellow or brown. They are typically found in low lying areas on dead logs, which is where I found this coral tooth mushroom. Not only are these edible, but they’re also valued for their medicinal properties related to brain health and are actually sold in capsule or powder form in many health food stores. 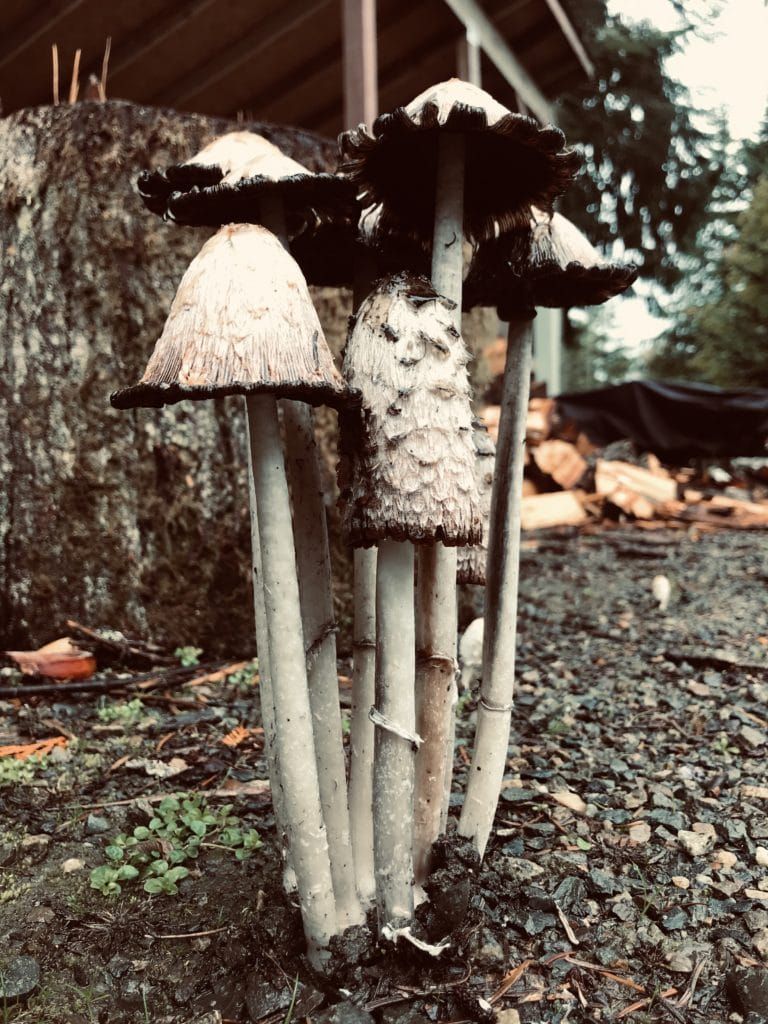 A Few Things to Remember

Never consume any mushrooms without first positively identifying them. Don’t harvest soggy or slimy mushrooms or mushrooms filled with insects. It’s always best to harvest from an area where you can observe both young and aged specimens to assist with identity confirmation.

If you come across a large group of mushrooms don’t harvest all of them. Keep in mind there are many other foragers out there to share with!

Don’t clean your mushrooms with water

This will cause them to deteriorate more quickly. Use a brush, cloth, or knife and gently clean or scrape them off.

Don’t become discouraged. Just think of it this way: you’re going on a walk in the woods, which is a gift to enjoy in itself — any mushrooms you harvest are a bonus!

Surround yourself with like-minded people

There are clubs and organizations that lead guided forays and provide educational information. This is a great way to meet other mushroom hunters, learn the basics of mushroom hunting and see what types of mushrooms are most commonly harvested in your area. There are also a number of Facebook communities you can join that share information on foraging and identification.

And finally — all of this may seem daunting at first — I never used to notice mushrooms when I was on hikes. Now that I have become interested in foraging and photography, I see them constantly. You will develop an eye for foraging — it just takes some practice!

Ready for your next outdoor adventure?

Check out our other blog posts for recommendations and helpful tips. We regularly publish new content, all from the perspective of a local.

Got your own tips or recommendations? Comment down below.

Posted in Things To Do

Army dropout embarking on an investigative journey. Sharing information, experiences, and reflections about transitioning out of the military, abandoning the rat race, nature, minimalism and van travels.

We use cookies on our website to give you the most relevant experience by remembering your preferences and repeat visits. By clicking “Accept All”, you consent to the use of ALL the cookies. However, you may visit "Cookie Settings" to provide a controlled consent.
Cookie SettingsAccept All
Manage consent