Anderson Island is the southernmost island in Puget Sound and is located in Pierce County in Washington State. Access to Anderson Island is by a ferry operated by Piece County or by private boat. The ferry ride is approximately twenty minutes and is one of the most enjoyable ways we know to spend 20 minutes.

Anderson Island is approximately 7.75 square miles in size. Around 1100 people call Anderson Island home year round. During the summer the population swells to over 4000. Named in 1841 by Charles Wilkes to repay the efforts of Mr. Anderson and Captain McNeill. Anderson Island has played a role in the commerce of the Puget Sound region. Starting in the 1870’s the sale of wood to the wood burning steamers that were used on Puget Sound was the primary industry on Anderson Island. Later brick making, farming and fishing were the industries that kept the island going. 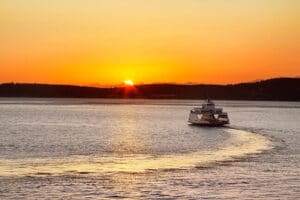