Mónica Guzmán is the author of I Never Thought Of It That Way: How to Have Fearlessly Curious Conversations in Dangerously Divided Times, but she is also a lot more than that. 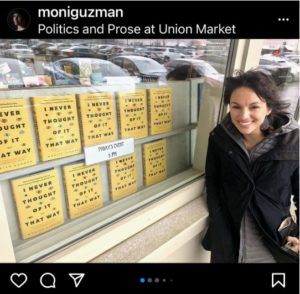 She is a mother of two, wife, journalist, volunteer and avid soft rock fan. Mónica Guzmán is a woman that is fueled by curiosity and driven by engaging conversations.

She was born in Mexico where she spent the first 6 years of her life. Then, her father was offered a job that required the family to move to Dallas, Texas. Not long after that he was transferred again to New Hampshire until Guzmán graduated high school. She went to college not too far from home in Maine where she studied journalism and quickly got a fellowship after college.

The end of her fellowship brought her to Seattle, Washington and after finishing, she knew she needed to stay. She was so enamored with the creative and entrepreneurial atmosphere of the city.

Seattle will be the setting where she writes her first book.

I Never Thought Of It That Way

I Never Thought Of It That Way: How to Have Fearlessly Curious Conversations in Dangerously Divided Times is aimed to give people the tools and solutions to help depolarize America.

There are five parts of this book. The first is explaining the problem, but the other four are purely solutions. One of the concepts Guzmán talks about is S.O.S or sorting, othering, and siloing. 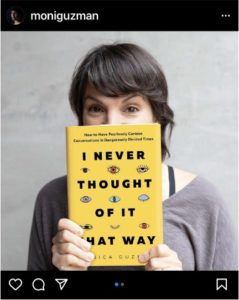 It explains how our brain hears information that we agree and do not agree with. But Guzmán claims that curiosity is a tool that we can aim at the things we don’t understand.

She gives you new questions to ask yourself: “What am I missing?”

She goes into depth about concepts like honesty, attachments, reason, opinion and assumptions in a way that makes you stop and really think.

To find out more about the book and Mónica visit her website.

How the Book Came to Be

Guzmán got inspiration to write a book during the election of 2016. Scary headlines were flooding social media, she found herself in conversations with her colleagues that seemed to blame other people or turn into rants. 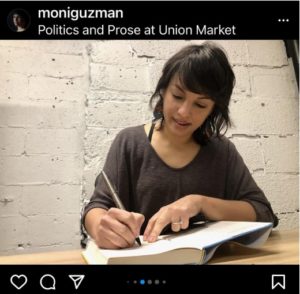 But she found that there was much more complexity under people’s votes. Her parents, both Mexican immigrants, voted for Trump despite her left leaning views. However, unlike most people at this time, she stopped and asked them “Why?”

She found that based on others' perspectives, experiences, and beliefs, there are a lot of reasons as to why you should or should not do something. And just because your reasons may suit your perspective, experience, or belief does not mean it will align with others’.

During this time of realization and engaging conversation with people that did not exactly think the same way as she did, Guzmán started a slack channel. She used this channel to collect thoughts, notes, and experiences. This will soon be some of the foundations for her book.

After getting approved and the journey of writing began, Guzmán faced what she expected to be the hardest thing she's ever done. “But expecting something doesn’t mean that you're ready for it,” she says on the Exploring Washington Podcast.

She signed her book deal in March of 2020, the exact day Wall Street crashed. Suddenly her vision of writing in coffee shops and hanging out with friends in between chapters was far from a reality with the COVID-19 pandemic.

Yet, she later found that social distancing provided her with a contrast that helped her articulate the polarization America is facing. 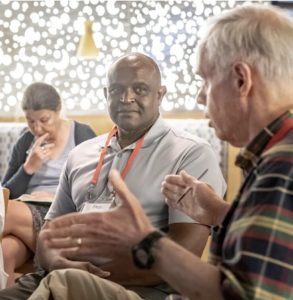 Braver Angels is an organization dedicated to depolarizing America. Guzmán is the director of digital and storytelling. Guzmán along with a large team of volunteers show that it is possible to talk productively about some of the toughest issues facing our country.

After her book tour, Guzmán says she has lots of work at Braver Angels to do but also there may be another book in her future, she just has to find something else to write about!

What was your favorite chapter of the book? Let us know in the comments below.